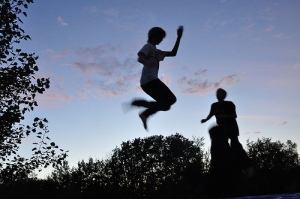 Anyone who speaks out against recreational trampoline use by kids quickly runs into one major obstacle: the darn things are a lot of fun. Bouncing high in the air, that stomach-flipping weightless sensation, the joy of conking heads with the other three kids boinging along with you…ah, childhood memories!

But for too many children those childhood memories include casts, crutches, and stitches–even hospital stays, surgery, and permanent neurologic damage. That’s why the American Academy of Pediatrics recently issued a statement strongly encouraging parents to keep their kids away from trampolines.

I know, I know… Just one more worry-wart, nanny-state, killjoy thing, you say. We all bounced on them, didn’t we? Why can’t the pediatricians just let kids be kids? They should all move to Canada…

Well, yes, I did occasionally play (injury-free) on a trampoline when I was a kid, and no one’s saying your children can’t. But before you set the kids a-boinging in the back yard, consider these facts:

But what about all the safety equipment, like netting and padding and such? Doesn’t that protect them?

The safety netting is often flimsy, poorly positioned, and kids often get hurt climbing on it. The pads over the frame and springs can deteriorate rapidly. And no one has shown that these make any difference at all–other than to give everyone a false sense of security.

And it is true of trampolines, like so many other modern products, that they don’t build ’em like they used to. The AAP report calls out the trampoline industry for making crummier units these days. Here’s one indication of worsening construction standards: the warranty on a new trampoline was 10 years in 1989. It’s five years today.

So, my advice: Ditch the trampoline. If parents absolutely can’t bear to part with it, adult supervision is critical. Set the unit up as close to the ground as possible, away from trees, fountains, family heirlooms, cliff edges, etc. Make a one-kid-at-a-time limit, and no flips or somersaults.

That’s a lot of supervision, and even then there are no guarantees… 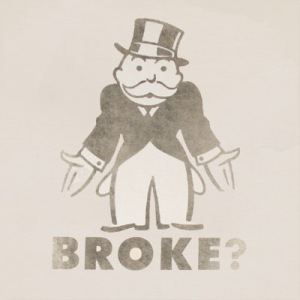 Must be all that breastfeeding...

Much ado is being made of a study in the The American Sociological Review which showed that women pay a steep economic price for breasfeeding their babies.

That’s kind of a “well, duh!” statement, I realize. It’s no surprise—early motherhood is rarely an economic boom-time for any woman, particularly for those women who have to quit work to have a baby, or who don’t receive some kind of paid maternity leave. All that bonding comes at a cost.

“By contrast, women who breast-fed for longer durations experienced a much steeper decline in earned income over the first five years of their children’s lives.”

The study has some problems. The researchers don’t say anything about the women they studied, or about what other factors might have had an impact on length of nursing and income. Were the “long-duration” moms better off financially, and so better able to afford the drop in income? Did other potential “long-duration” breastfeeding moms end up in the “short-duration” category because of the financial need to quickly return to a workplaces hostile to breastfeeding? In other words, would the income differences be so stark if employers really embraced their breastfeeding employees?

You can read this study as evidence that breast feeding is financially bad for mothers and, ultimately, their children, as the loss of income makes life more difficult for families. Or you can see it as an indictment of how corporations (and by extension, American society) view breastfeeding—like paid vacation and sick leave, it’s just one more thing that gets in the way of a productivity. (All that icky workplace pumping! What a waste of widget-assembling time!)

So, bring on the formula, right?

Wrong. The American Academy of Pediatrics recommends that women breast-feed for 12 months or more. There’s sound scientific evidence to back up that recommendation. Unfortunately we live in a time and place where scientific evidence often takes a back seat to political expediency and corporate pressure. In short-term-profit-driven America, the health of the next generation of workers doesn’t count for much.

Still, there’s plenty you can do to help. The American Academy of Pediatrics has an excellent breastfeeding Advocacy Resource Guide. Do you have an advocacy group you’d like to mention? Pass it on!

This is the first in a series of frequently asked questions I hear from parents in my practice. If you have an FAQ about children’s health, send it along! 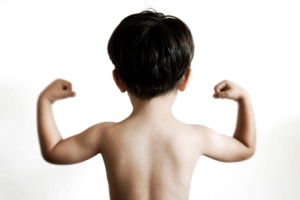 Vitamin D supplementation for breastfed newborns is a hot topic. Though it’s strongly recommended by the American Academy of Pediatrics, many parents understandably question the need for it. After all, isn’t breast milk nature’s perfect food? Aren’t we undermining breastfeeding promotion by saying mother’s milk is deficient in something? And, hey…if this is such a problem, how did the human race manage to get by without vitamin drops all these eons??

Let’s look at the issue from a number of angles and see what the fuss is all about. I’ll start with a basic Q & A and then go into more detail in future posts.

Vitamin D is a steroid hormone. It belongs to the same chemical family as cholesterol, testosterone and estrogen, among many other compounds.

It was originally thought to only play a role in bone health, by helping the body absorb calcium. In recent years, though, vitamin D has been shown to play an important role in immune system functioning, both by heightening the body’s responses to invading bacteria and preventing the immune system from attacking normal tissues.

There are two major sources: sunlight and diet. Sunlight is the more efficient way to get vitamin D. 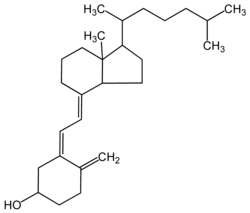 4) What happens if we don’t get enough?

Historically, the connection between lack of sunshine and rickets–soft, deformed bones–was made in the 19th century. (Pelvic bones shrunken and deformed by rickets were the cause of many deaths in childbirth in those days.) Later, a lack of vitamin D was identified as the cause of rickets. Osteoporosis, especially in women, also results from inadequate vitamin D. Recently, as vitamin D’s immune system role has become clearer, a lack of vitamin D has also been linked to a number of serious chronic conditions, such as Type 1 diabetes, systemic lupus erythematosis, and multiple sclerosis.

5) Why is there so much vitamin D deficiency these days?

It’s mainly due to decreased sun exposure and poor diet.

6) So why are breastfed babies at risk for vitamin D deficiency?

Many pregnant or lactating women don’t have enough vitamin D for their own bodies, let alone enough to build up their babies’ supply. A mother’s problem soon becomes her baby’s problem, too.