Is there a link between where and how your baby is born and her chances of developing asthma and atopic dermatitis (a.k.a. eczema) later in life? 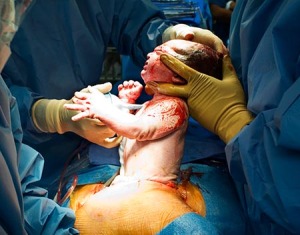 It isn’t certain yet what the source of that link is (and I’ll talk about the difference between “association” and “causation” in a future post), but the signs are pointing to changes in the gut microbiota brought on by cesarean birth.

“Microbiota” is the name given to the collection of microorganisms that normally live in a given organ in the body. There’s a microbiota (that is, a group of germs) found in the mouth, for example, another that lives on the skin, and still another that populates the bowel. These bowel bacteria are usually picked up at birth – mainly from mother’s vagina and rectum in vaginal births, and from the skin and hospital environment in cesarean births.

Whatever the source, the bugs hike on down from mouth to bowel right after birth and set up shop. They do a lifetime of good things for us (they make vitamin K and do battle with bad germs, among many other things), and we feed* and care for them as our way of saying thanks. It’s a beneficial relationship that’s been with us for many millions of years.

Children born by cesarean section, though, generally have a higher count of “hospital bugs” in the bowel than those born vaginally. A particularly worrisome hospital bug is Clostridium difficile, a bacteria that is best known for causing serious diarrhea in the hospitalized elderly.

Here’s the cesarean-asthma theory in a nutshell: we evolved right along with the bowel germs we acquire during a vaginal birth, and when unusual germs like C. difficile show up instead, our immune system doesn’t like it. A low-grade, long-lasting bowel inflammation directed at these intruders can begin right after birth and last for years. To make an extremely long story short, that inflammation can make it easier to develop asthma, atopic dermatitis, and possibly other inflammatory diseases later on – even diabetes and obesity.

But hold on a moment before you head off to picket your local maternity ward. The cesarean-asthma link is not as clear-cut a case as it may seem…at least not yet. (More in Part 2).

(*Breast milk contains sugars that babies can’t digest – but that bowel bacteria eat right up. We love our bugs!)