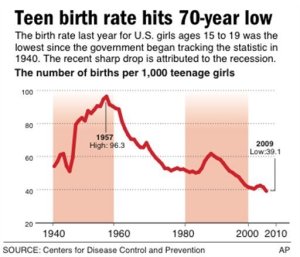 The teen birth rate continues to decrease. It’s now the lowest it’s been since the government began tracking it in 1940.

Ah, a dedicated Planned Parenthood foe might think. Must be all those abortions, right?

Teen abortion rates are the lowest they’ve been since 1972–the year before Roe vs. Wade made abortion legal.

Lower teen birth rates and lower abortion rates?? How is that possible? There’s a straightforward explanation, according to Leslie Kantor, vice president of education for Planned Parenthood Federation of America: more teens are using birth control, and using it properly. Here’s Kantor’s recipe for continued success:

“We can continue this progress by doing what we know works, including expanding access to high-quality sex education and making long-acting types of birth control, such as IUDs and implants, more accessible to teens.”

All of which is politically vulnerable next month, of course…