For space-nuts of a certain age… 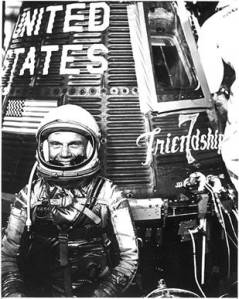 Monday is the 50th anniversary of John Glenn’s historic three-orbit space ride. That means it was probably fifty years ago tonight that I started worrying about him. I tossed and turned in bed, visions of catastrophe filling my eight year-old head: What if he can’t get back down? Could they send another rocket up to get him? How long would his food and water and oxygen last? Visions of poor John Glenn endlessly circling the earth, waiting to die, kept me wide awake.

He made it back, of course. We cheered in class when we heard he’d splashed down. Sister Margaret Jeanette even cried–a shocking sight for a room full of second-graders, since none of us knew nuns could cry. I slept like a baby that night.

Happy anniversary to John Glenn (and the rest of us astro-nuts).

Filed under etc., Science, Things I learned en route to looking up other things