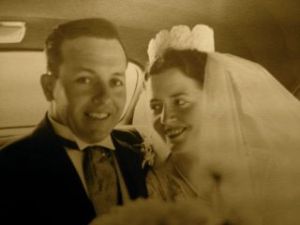 Actually, I owe my very existence to one particular case of polio.

Ed, one of my father’s best friends in college, had his legs paralyzed by polio in early childhood. When World War II came along, Dad went off to the South Pacific and Ed, his disability disqualifying him from active duty, took a desk job on Chicago’s Navy Pier. As fate would have it, one of the women who worked in his office was a red-haired Irish lass named Peg Dalton. Long story short, Ed thought Peg and Barney would be a good match, and 66 years later, they still are.

Bottom line: No polio, no me. I hate to seem ungrateful to the virus that made my blogging possible, but I can’t wait to see it vanish from the earth.