Poor parents diluting formula: A sign of the times? 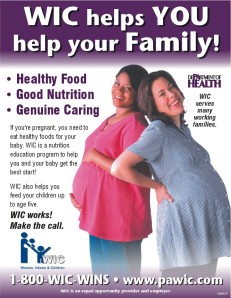 On the political chopping block?

This is a very worrisome item if you care about children and the future of this country.

Researchers at Cincinnati Children’s Hospital found that 27% of families enrolled in the federal Special Supplemental Program for Women, Infants and Children program (better known as WIC) reported running out of their babies’ WIC-supplied formula at the end of most months, and watering down the formula to get by.

That’s a very bad thing to do to a developing brain. There is ample evidence from all over the world that malnourished infants and toddlers can end up permanently damaged. Preventing that from happening is why WIC was founded in the first place.

This doesn’t seem to trouble the members of Congress, particularly the Tea Party Republicans. The recent Congressional budget fight, which is far from over, included Republican-led proposals that could drop 700,000 women and children from the WIC program. The nutritional toll this would take on American children is appalling.

Keep that in mind next time you hear politicans babble on about poor people getting a free ride.

(P.S.: WIC is very much pro-breastfeeding. They provide formula to women who decide not to nurse their babies.)